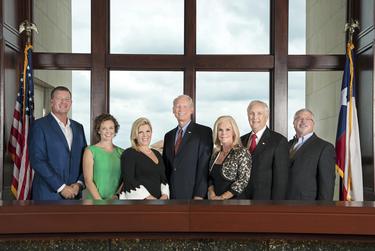 Starting Tuesday, the mayor of Colleyville said residents can attend churches and other places of worship so long as social distancing guidelines are followed. He also said starting Friday they can dine at restaurants with outdoor patios — so long as tables are spaced apart — and have one-on-one visits with salon establishments, gyms and massage therapists.

With that announcement, Colleyville Mayor Richard Newton on Tuesday appears to be the first mayor in Texas to move ahead with plans to relax stay-at-home orders aimed to curb the spread of the coronavirus, well before the governor has signed off on such actions statewide.

The move by the city was first made public in a “Declaration of Disaster” signed by Newton and City Secretary Christine Loven, despite signs that the outbreak is just beginning to strike some parts of the country. It’s also unclear whether the city’s declaration has any teeth, given Gov. Greg Abbott’s statewide executive order, which mandates all non-essential businesses shut down through the end of the month.

“While safety remains our top priority, we also recognize the need to re-open our city. We are beginning that process in a methodical and safe way,” Newton said in a letter to Colleyville employers which accompanied the proclamation, according to The Texan.

A spokesman for Gov. Greg Abbott’s office did not immediately respond to a request for comment on whether Colleyville’s new order trumps the governor’s. Abbott last Friday announced he would be rolling out a plan to reopen the Texas economy, with additional announcements set for April 27 and sometime in May.

The Texas Alcoholic Beverage Commission told The Texas Tribune that generally any restaurants operating in defiance of Abbott’s orders could be subject to warnings and a possible license suspension. A spokesman for the TABC said that it has not had to issue any citations thus far and has been working to inform and educate business owners.

But across the country, governors of red states have been weighing steps toward lifting stay-at-home and shelter-in-place orders and reviving their stalled economies. Georgia plans to reopen bowling alleys, hair and nail salons, fitness centers and massage therapy businesses; in Tennessee, Gov. Bill Lee said that he was not extending his “safer-at-home” order that is set to expire on April 30.

In Texas, Abbott said the process of re-opening the economy will be a staggered one, driven by data and science. Last week, the governor named a “statewide strike force” devoted to getting the economy up and running. The group will oversee what the governor described as a phased reopening.

And the governor has projected a relatively sunny picture of the state’s coronavirus situation — despite the state ranking second-worst in the nation for COVID-19 testing. In late March, Abbott said that of all the people being tested for the coronavirus in Texas, less than 10% have tested positive.

Still, Colleyville’s order, on its face, appears to defy state law and Tarrant County Judge Glen Whitley’s orders for the area. The county’s stay-at-home order is in place through April 30.

“It sounds like [Newton’s] going a little bit beyond what the governor’s rules are, and I think he needs to be mindful of that,” Whitley said. “I think we’re all beginning to look at the possibility of lessening some restrictions, but we still need to stay within what the governor has outlined.

“I feel we need to hold the line and follow what the governor is saying and be very, very careful in making sure that we’ve told people exactly what is expected as they come out and begin doing those things that have had restrictions on them in the past,” Whitley added.

The news out of Colleyville comes as some Texas Republicans are itching to get the state’s economy up and running. During a TV appearance on Fox News, Lt. Gov. Dan Patrick said the economic restrictions currently in place are “crushing small businesses” and the economic market.