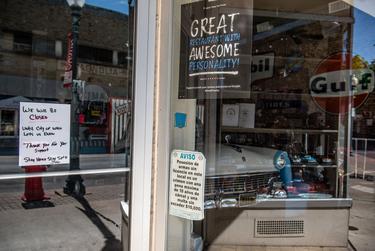 Texas’ economy is taking a catastrophic hit — and hundreds of thousands of Texans are out of work — as officials shutter businesses and limit some establishment’s operations to stop the spread of the new coronavirus. But while Texans’ optimism about the state’s economy has fallen, they largely support those measures, according to the latest University of Texas/Texas Tribune Poll.

Two-thirds of registered Texas voters agree with decisions by Gov. Greg Abbott and several local officials to suspend nonessential business operations. And more than three-quarters of voters support orders to stay home except for essential activities. The poll’s findings come as Abbott says he will soon announce plans to reopen a wide range of Texas businesses.

Some hardline Republicans have pressured Abbott, who has taken a middle-ground approach in responding to the global health crisis, to relax his statewide stay-at-home order. And Republican Lt. Gov. Dan Patrick has suggested that saving the economy was more important than responding to the coronavirus. But after first making that suggestion last month, Patrick has experienced an uptick of disapproval among two groups: registered voters over 65 and independents. The poll was conducted before Patrick went on national television this week and said “there are more important things than living” as he advocated for reopening the economy.

“To the extent that some people are saying Republicans are beating down the doors of their houses… there is no evidence of that in this poll,” said James Henson, co-director of the poll and head of the Texas Politics Project at UT-Austin. “There’s not evidence of resisting serious measures.”

Most of the things the Texas and local governments have done to address the pandemic — like closing schools, prohibiting large gatherings and restricting some in-person religious services — are favored by strong majorities of registered voters. But there are notable exceptions for state officials’ attempts to ban abortion and local officials’ push to release some nonviolent jail inmates:

Voters’ assessment of the economy mirrors the downturn caused by the pandemic: only 21% say the national economy is in better shape than it was a year ago, while 64% say things are worse now.

The voters say the same thing, more or less, about the state economy: 22% say it’s better than it was a year ago, and 54% say it’s worse. It’s worth noting that a dramatic drop in oil prices came after the poll was closed.

Asked about the economic situations in their own households, 28% of Texans say they are better off economically than they were a year ago; 34% say their finances are about the same, and 35% say things are worse now.

The University of Texas/Texas Tribune internet survey of 1,200 registered voters was conducted from April 10 to April 19 and has an overall margin of error of +/- 2.83 percentage points. Numbers in charts might not add up to 100% because of rounding.

Disclosure: The University of Texas at Austin has been a financial supporter of The Texas Tribune, a nonprofit, nonpartisan news organization that is funded in part by donations from members, foundations and corporate sponsors. Financial supporters play no role in the Tribune’s journalism. Find a complete list of them here.