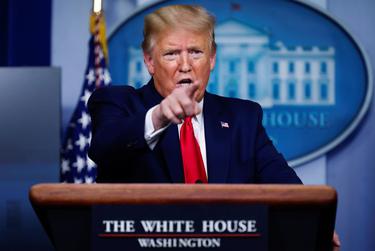 President Donald Trump said late Monday evening he intends to sign an executive order to temporarily suspend immigration into the United States in “light of the attack” from the coronavirus pandemic.

It’s unclear how far-reaching the order will be, when it will be signed or which countries it will apply to, but it comes as the president repeatedly defended himself against criticism that he should have reacted earlier to deal with the pandemic. The move is also intended to protect American jobs, the president said in a tweet.

“In light of the attack from the Invisible Enemy, as well as the need to protect the jobs of our GREAT American Citizens, I will be signing an Executive Order to temporarily suspend immigration into the United States!” he wrote.

Trump banned foreigners who had been to China within the past 14 days from entering the United States. He’s repeatedly mentioned the move in news conferences and said his decision likely saved American lives.

The president has already issued an order that immediately returns to Mexico undocumented immigrants apprehended by the U.S. Border Patrol without giving them the chance to apply for asylum. Department of Homeland Security officials said the policy would help reduce overcrowding in detention facilities and lessen the risk of widespread infection among immigrants. But immigrant rights groups insist the policy was nothing more than a restrictive policy to further the president’s immigration agenda.

Trump’s first term in office has been marked by several other immigration measures designed to slow the number of immigrants who enter the country. They include the family separations policy of 2018 where families who traveled to the United States together to seek asylum were separated and the adults placed in detention. That was followed by the Migrant Protection Policy that requires asylum seekers to wait in Mexico for their American court dates. The separation policy ended after a few months amid a nationwide outcry over the policy, but the MPP program remains in effect and has so far survived several court challenges.

Though the president’s policies have had the intended effect to reduce immigration to this country, undocumented workers still make up a significant amount of the state’s labor force.

On the employment front, bars, restaurants and retail stores across the country and Texas have reduced operations or closed completely under the orders of officials trying to stop the spread of COVID-19.

As social distancing roils the economy, companies large and small have reduced employees’ hours, furloughed staffers or laid off workers. The economic crisis continues to play out across the nation as more than 5.2 million Americans applied for unemployment insurance during the week ending April 11. Congress passed a historic relief package and set aside $350 billion for small business loans. Those funds dried up last week, before many companies were able to get their applications in.