Oil prices collapsed, but that doesn’t mean Texans will get free gasoline 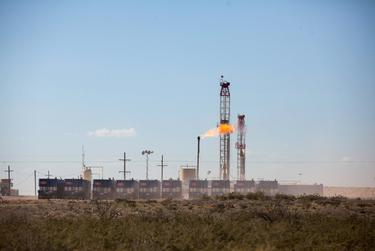 On Monday, oil prices per barrel dropped well into the negatives for the first time in history, and oil producers had to pay buyers to take the product.

But that doesn’t mean that gas stations are going to start giving away gasoline for free.

While economic experts say gas prices could continue to decline because of the sharp drop-off in demand, Texans won’t see gas prices dip into the negatives as they did with oil. Refineries, which turn crude into gasoline, would stop producing before that would happen.

“Certainly nobody’s going to give us gasoline,” said Ed Hirs, a University of Houston energy fellow. “It just points to the fact that there’s no place for the crude to go because consumers aren’t using it. We’re not driving. We’re not flying.”

With Texans across the state staying at home instead of commuting to work or traveling during the coronavirus pandemic, the demand for gasoline has declined significantly. Economists say this lack of consumption is one of the primary factors responsible for the collapse in oil prices Monday and also what’s keeping the price of gas low.

Refineries act as the connector between oil producers and gasoline consumers. They take in oil and process it into gasoline, diesel and jet fuel, adding any additional components like ethanol. Refineries aren’t turning as much oil into gas presently, causing a huge buildup in crude inventories, said Jesse Thompson, president of the Houston chapter of the United States Association for Energy Economics.

Since crude makes up the majority of gasoline, a change in the price of oil is typically reflected in changing prices at the pump. But the price of gasoline never fluctuates as much as the price of oil, said Thompson, who is also a business economist at the Houston branch of the Federal Reserve Bank of Dallas.

The price of oil “doesn’t flow one-for-one” into the price of gas, Hirs said.

“Gasoline is a refined product that comes from oil that was produced 60 to 90 days ago,” Hirs said. “The refiner has typically already paid for crude oil and sold it to distribution centers or has it in convenience stores or gas stations.”

That still doesn’t mean there’ll be a dramatic fall in gas prices two or three months from now, Hirs said. While oil and gas aren’t moving through the market as quickly as usual because of low demand, Hirs said there are still state and federal taxes that factor into the price Texans see at the gas pump.

The significant downturn in demand comes as the Texas economy has all but shut down, yet the level of crude oil production in March remained high, said Karr Ingham, petroleum economist for the Texas Alliance of Energy Producers.

“The highest levels of production, and demand around our ankles, is a recipe for price collapse,” Ingham said.

On Monday, there was “absolutely no demand” for crude oil, Ingham said, which caused the price to collapse as oil producers are running out of space to store the product.

But this was a “one-day phenomenon” that won’t translate into free gasoline, Ingham said. For that to happen in the gasoline industry, everyone would have to stop driving, flying or using gas in any capacity.

Gov. Greg Abbott has taken the controversial first steps of reopening the economy. And Lt. Gov Dan Patrick reiterated his divisive opinion Tuesday that the state shouldn’t be locked down since “there are more important things than living.”

Still, some experts have said it’s unclear what the economic impact of opening businesses back up and lifting stay-at-home orders will be since many people may opt to still limit their contact with other people.

Officials’ moves to get the economy back up and running come as summer is just around the corner — normally a time full of road trips, travel and increased demand for gas. But it’s highly unlikely that the oil and gas industries will hit a rebound and find increased demand, Ingham said, considering the near-total shutdown of the economy and closing of businesses and restaurants across the state.

“Just imagine thinking of yourself going on a leisure trip and staying in a hotel and eating in a restaurant,” Ingham said. “Those things are not happening at all right now, definitely not for leisure purposes. It’s hard to imagine that’s going to change significantly by June 1.”

Disclosure: The Texas Alliance of Energy Producers and the University of Houston have been financial supporters of The Texas Tribune, a nonprofit, nonpartisan news organization that is funded in part by donations from members, foundations and corporate sponsors. Financial supporters play no role in the Tribune’s journalism. Find a complete list of them here.