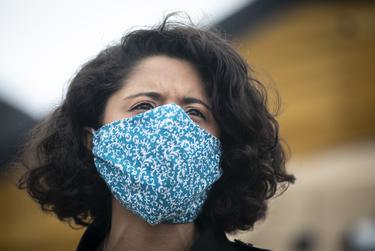 *Editor’s note: this story has been updated to include additional comment.

A Houston area doctor who is also a conservative political activist is suing to block Harris County Judge Lina Hidalgo’s recent order requiring residents over 10 years old to wear face masks in public places for 30 days, with some narrow exceptions.

“The rights we enjoy under the Texas Constitution are being trampled on by Judge Hidalgo, while millions of individuals have lost their jobs and thousands of businesses are on the brink of bankruptcy,” Dr. Steven Hotze’s petition to the Harris County District Court reads. “If Judge Hidalgo’s Order is not declared unconstitutional and void, once this virus passes, the rights we are afforded under the Texas Constitution will forever be damaged.”

The suit claims Hidalgo has exceeded her authority by implementing orders more restrictive than those of Gov. Greg Abbott, which take precedence. It also claims that the Disaster Act limits Hidalgo’s powers to those explicitly outlined in the statute, which “does not contain any language forcing private citizens to wear masks, wash their hands, refrain from touching their face, or stay six feet away from another under the threat of fines.”

Hidalgo’s order, signed Wednesday and slated to take effect on Monday, comes after similar measures were taken by local officials in Austin, Dallas and Laredo to slow the spread of the new coronavirus. According to the order, violations are punishable by a $1,000 fine and up to 180 days in jail.

Jared Woodfill, who is representing Hotze, said Hidalgo must show a compelling governmental interest and ensure the infringement on private residents’ rights is narrow; he believes she’s satisfied neither requirement.

“This is clearly the most egregious order that I’ve seen from an elected official regarding this COVID-19 pandemic in the entire country. I haven’t seen any that have gone this far,” he said, referencing the hefty fine. “This sets horrible precedent for future viruses and future elected officials who will come in and say, ‘Well, look at what Judge Hidalgo did. We can do the same thing.'”

He expects there will be a hearing on a temporary restraining order by Friday. If denied, Woodfill said they will immediately appeal to the Texas Supreme Court. In the meantime, a rally called “Let Freedom Ring” is planned to take place outside Hidalgo’s office at 3 p.m. Thursday.

Hidalgo could not be immediately be reached for comment.

The decision quickly drew criticism from Republican elected officials like Lt. Gov. Dan Patrick and U.S. Rep. Dan Crenshaw, R-Houston. Attorney General Ken Paxton emphasized that police officers should “use discretion” and focus on dangerous criminals posing a threat to the community. Nearby Galveston and Montgomery counties made clear they would not be following Hidalgo’s lead.

Hotze is also part of the group, also represented by Woodfill, that previously challenged Hidalgo’s stay-at-home order in court on the basis that limiting in-person church services violated their First Amendment rights. He and the three other plaintiffs asked for the suit to be dismissed following Gov. Abbott’s statewide stay-at-home order, which allows services to continue as long as proper social distancing measures are taken.