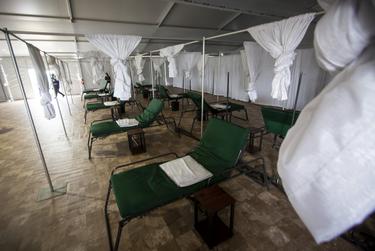 A temporary Houston medical shelter set up to take a potential overflow of coronavirus patients will close without receiving any patients because area hospitals have not exceeded capacity as was feared, Harris County Judge Lina Hidalgo announced Friday. County commissioners agreed to spend up to $60 million on the facility, which ended up with a projected cost of $17 million.

“If we hadn’t had this resource and we had seen a surge, the alternative would have been the types of tragic situations we’ve seen elsewhere,” Hidalgo said at a press conference. “We will no longer need this specific facility not because we don’t need surge capacity. We still could surge, we have no vaccine, we have no cure for this virus.”

At a press conference last week, Gov. Greg Abbott said hospitals were not reaching capacity and disclosed details of plans to begin reopening the economy. But he warned that the public health crisis is not over.

“You’ve made personal sacrifices to ensure that our state slows the spread of COVID-19. You helped to reduce the number of Texans who needed hospital care. You truly helped to save lives. Now, Texas needs you to continue those efforts,” Abbott said.

The Houston facility is at NRG Park. Officials said the Federal Emergency Management Agency should reimburse 75% of the final bill for the center.

In Dallas, a similar medical shelter was set up at the Kay Bailey Hutchison Convention Center. The center is being used as an overflow for local homeless shelters, but its medical role has been put on hold.